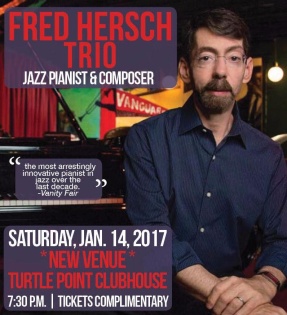 An eleven-time Grammy nominee, FRED HERSCH is a select member of jazz´s piano pantheon. He is a pervasively influential creative force who has shaped the music´s course over more than three decades as an improviser, composer, educator, bandleader, collaborator and recording artist. In addition to the eight Grammy nominations he has received, FRED HERSCH continues to earn jazz´s most prestigious awards, including recent distinctions as a 2016 Doris Duke Artist and 2016 Jazz Pianist of the Year from the Jazz Journalists Association.

Proclaimed by Vanity Fair as, “the most arrestingly innovative pianist in jazz over the last decade or so,” FRED HERSCH balances his internationally recognized instrumental skills with significant achievements as a composer, band leader, collaborator and theatrical conceptualist. FRED HERSCH has long defined jazz´s creative edge in a wide variety of settings, from his breathtaking solo recitals and extraordinary trios with bassist John Hébert and drummer Eric McPherson. The Wall Street Journal recently described THE FRED HERSCH TRIO as “one of the major ensembles of our time.” Hersch’s 2014 trio release Floating lived up to the praise and received two Grammy nominations and topped the charts. Floating (Palmetto) was described as “an extravagantly beautiful new album” by Nate Chinen of the New York Times and earned 2014 Grammy nominations for Best Jazz Album and Best Jazz Solo. Also, the FRED HERSCH TRIO’S two-CD Palmetto set Alive at the Vanguard was awarded the 2012 Grand Prix du Disque in France and named one of the year´s best CDs by Downbeat magazine.

To leave a Comment, include your first and last name