There are a variety of ticket options for everyone’s budget and preferences. From experiencing front row box seats to enjoying aerial views from the grandstand, the Volvo Car Open offers the perfect opportunity for you to enjoy thrilling tennis. Explore single session ticket prices if you want to spend a single day or review  ticket packages if you plan to enjoy multiple days of tennis. Ticket packages offer more tennis at a greater value and provide Volvo Ace Club membership! Learn more below, then pick the ticket that’s right for you!

Mark Laird is Associate Professor at the John H. Daniels Faculty of Architecture, Landscape, and Design, and has a consultancy in historic landscape conservation with bases in Toronto and the UK.

As a consultant, he has advised on sites in Europe and North America: Hestercombe, Gibside, Wrest Park, and Strawberry Hill in England; Fürst-Pückler-Park in Germany; the Belvedere Garten in Austria; the Halifax Public Gardens, Grange Park, and Allan Gardens in Canada; and Vimy Ridge in France. For replanting work at Painshill Park, England, where he is an Associate Director, he was a joint recipient of a 1998 Europa Nostra medal.

Lecture is free to all. The reception is $10 for members and $20 for non-member. No door admittance can be accommodated, please RSVP here.

A meeting to introduce Seabrookers to the Seabrook Island Village Program concept is planned for today at 4:00 pm in the Live Oak Room at the Lake House.

We will be presenting the specifics of Seabrook Island Village, an organization being established for Seabrookers to help people age in place in their homes as long as it is possible. Additionally we are looking forward to receiving feedback from interested participants and volunteers.

We have some speakers scheduled to present during the meeting who want to endorse the concept we are presenting. They are Gerry King, retired medical doctor who lives on the island, Ron Ciancio, Mayor of Seabrook and Jean Dunn, whose parents live in a village in Blufton, like the one we want to set up. We will keep the meeting and presentations short so that we have plenty of time for your questions and input.

This Exchange Club meeting is open to residents of Kiawah, Seabrook and Kiawah River Estates and their guests. Reservations are required and, along with a dinner cost of $35, need to be received no later than Friday, April 12. Please provide reservations and payment to John Reock, 1969 Marsh Oak Lane, Johns Island, SC 29455,  (404) 620-8001.

Since 2007 Garden & Gun Magazine has successfully been speaking to a way of life that’s the soul of gracious southern living. Appealing to both men and women it captures the essence of the southern sporting life, adventurous travel, and good food and drink.

Rebecca Darwin is the creator and visionary behind Garden & Gun.

With her co-founders, she is responsible for its amazing appeal and success. G&G is a multi-platform media company, anchored by its award-winning magazine, website and digital newsletter. The brand continues to develop under Darwin’s leadership in a number of exciting directions. Rebecca will discuss the beginnings of Garden & Gun, its important place in the lives of so many, its success and its future.

Darwin is a native South Carolinian. After graduating from the University of North Carolina at Chapel Hill, she ventured to New York City where she ultimately became the first female Publisher of the New Yorker Magazine. Additional roles included the Publisher of Mirabella and Marketing Director of Fortune. She has served as president and CEO of the National Association for Female Executives.  In addition, she currently serves on the board for Spoleto Festival USA and the Institute for the Arts & Humanity at her alma mater. Her immersion in the worlds of media, fashion, advertising, and business brings as understanding and grace to the world of Garden and Gun.

There is a Public Hearing to be held at the Town of Seabrook Island on Tuesday, March 26, 2019, at 2:15 pm. Click here for more information.

To see the agenda for the Council Meeting which follows at 2:30 pm, click here.

Charlton Singleton is joining forces with the Charleston Symphony! Together with a jazz trio, Charlton Singleton and the Charleston Symphony’s string section will play a swinging program featuring Clifford Brown’s soulful jazz classics and Mongo Santamaria’s passion-filled “Afro Blue” that will surely leave you feeling a little more rhythm and a little less of the blues.

For more information about this and other upcoming events at the Charleston Music Hall, click here

The Seabrook Artist Guild is very excited to have the renowned artist, William P. Duffy back on Seabrook to do both a painting demonstration at their May 2, 2019, monthly meeting (2:00 to 3:30 pm) and a two-day workshop at the Community Center on May 22-23.

His workshop last year filled up quickly and received very positive feedback from all participants!

Bill comes with not only a wealth of experience but a very productive and personal teaching approach.

William P. Duffy was born in Boston in 1948. He received his art education at the School of the Worcester Art Museum/Clark University and the Boston Architectural Center. His work can be found in private collections throughout the United States and in several foreign countries. He is a Fellow of the American Society of Marine Artists, and is a member of New England Plein Air Painters, an artist member of the Copley Society, and a member of the Oil Painters of America in whose 2006 national exhibition Bill was given an Award of Excellence.

END_OF_DOCUMENT_TOKEN_TO_BE_REPLACED

You have probably noticed the American flags that are placed around the circle at Freshfields and at the Kiawah and Seabrook entrances for major holidays.  The Kiawah-Seabrook Exchange Club does that for our community, and Exchange Club member Jim Bannister is one of the leaders of the effort.

You might not know that Jim also conducts a tribute to “Fallen Heroes” at every Exchange Club meeting.  The Fallen Heroes are South Carolina natives who gave their lives during the War on Terror. He researches the story of each one and finds suitable photos that are displayed during his comments. Every flag displayed by the club on holidays bears a yellow ribbon with the name of one of these fallen heroes.

On Wednesday evening, March 21, Jim and his wife Marlise were

honored with a very special flag for a very special fallen hero.  The yellow ribbon on this flag is in honor of their own grandson, Sergeant First Class Zachary Alan Bannister, of Sanford, SC, age 33, who died on October 17, 2016 in Kenya, and it’s a replica of the flag that’s among those displayed on holidays in our community.

Jim and Marlise remind all of us of the sacrifices made by Americans in defense of our country and our freedom. It was our privilege to honor their grandson with a flag that bears his name. 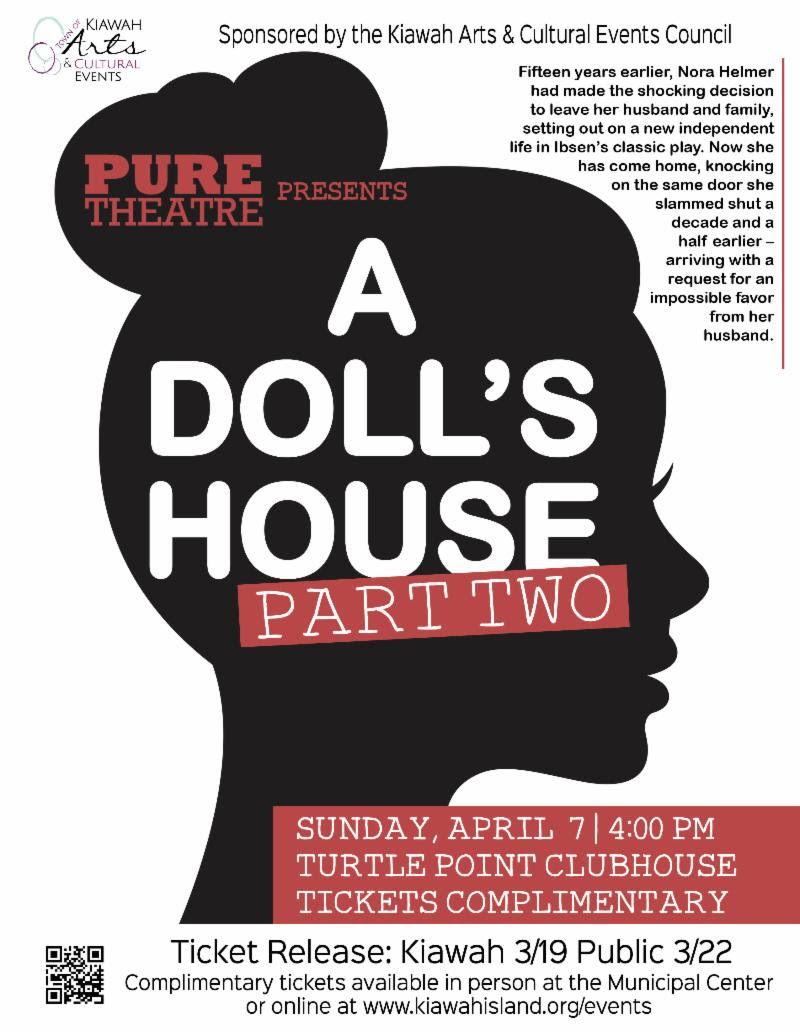 The Kiawah Arts and Cultural Events Council brings A Doll’s House, Part 2 to the Turtle Point Clubhouse on Sunday, April 7, 2019 at 4:00 pm. Complimentary tickets are available in person at the Kiawah Municipal Center or on-line. Ticket release for Kiawah is on March 19, 2019 and for the public on March 22, 2019. Learn more.

END_OF_DOCUMENT_TOKEN_TO_BE_REPLACED

The Charleston Outdoor Fest is set for April 13 and 14 at James Island County Park! This family-friendly annual event celebrates the paddlesports and outdoor recreation communities.  Click here for the schedule and information.

Celebrating nature’s playground, the Charleston Outdoor Fest features a multitude of outdoor recreation activities available for attendees to explore in a festival setting. Event attendees can try their hand at paddlesports like kayaking, canoeing, and stand up paddleboarding, in the calm waters of James Island County Park’s lake with boats and equipment available on site.

END_OF_DOCUMENT_TOKEN_TO_BE_REPLACED

As many of you have noticed on social media lately our male Wild Turkeys, or toms, are being quite aggressive and putting on quite the show. Actually that’s right on cue for Wild Turkeys on Seabrook Island as breeding and nesting for Wild Turkeys begins in late February around this part of the east coast. Increasing day length and warmer weather determine the date when the breeding season begins. You might be interested in knowing some Wild Turkey facts.

A Wild Tom Turkey, with his brightly colored head, gives a loud gobbling call to attract females and then puffs up and fluffs his feathers, swells the wattle, and spreads, drops and drags his wings while strutting around in a mating dance. All of that plus some humming sounds entices the female. Once mating occurs, that female goes off to find her nesting site while the male can continue looking for other females. The male might mate with three or four other females.

Interestingly, after the female turkey, dully colored for camouflage, finds her ground nest site, will lay only one egg. She will cover the egg with ground debris, then leave to feed and roost elsewhere. The next day she will lay another egg in the same nest and then leave again. This continues until she has laid all her fertilized eggs, which usually number from nine to thirteen. Then she will sit on the nest for the next twenty eight days as the eggs incubate leaving briefly once a day to feed. Because the nest is on the ground, the eggs are at risk from predators such as raccoons, bobcats, opossums, and even snakes. However, on Seabrook Island the turkey population seems to be growing so we must have more Wild Turkeys than predators.

Apparently Wild Turkeys have a pecking order within their flock. During mating season the males become quite aggressive towards anything they perceive as a threat. I thought the tom was seeing his reflection on the car and was attacking what he thought was another male. And, this might have been the case. However, it was also suggested that turkeys have lost their fear of humans and assimilated to life in neighborhoods, and that this tom with his hormonal spike, might have seen the automobile as the threat and was trying to knock the car down the pecking order.

Don’t feed Wild Turkeys as this can cause them to act tame and may lead to bold or aggressive behavior.

You may threaten a bold or aggressive turkey by making loud noises, swatting it with a broom, or spraying water from a hose.

Turkeys can also respond aggressively to shiny objects like car windows, mirrors and polished car doors. It is recommended to cover the reflection if possible.

So, maybe we should all keep a broom handy when we drive or walk around Seabrook Island so we aren’t knocked down the pecking order. Just keep in mind Wild Turkeys can run up to a speed of 25 mph and fly at a speed of 55 mph. Have fun, it’s only six more months until deer mating season!