Posted on September 12, 2019 by seabrookislandblog 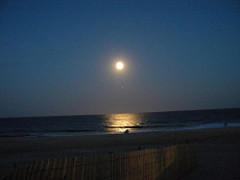 Let’s celebrate our beautiful island’s escape from the total wrath of Dorian with a bonfire on the beach shared with friends. We will start the bonfire near sunset and will need to be out by 10:00. The bonfire will be between Boardwalk 1 and 2.

To keep things simple, each person brings what you want: food, drinks, chairs and a stick of firewood for a big bonfire. Nothing will be provided but a beautiful beach, a bonfire and, hopefully, a full moon. Please note, all that debris from Dorian is not yet ready for the bonfire so bring aged wood instead.

Put these dates for the Full Moon Bonfires on your calendar:

There’s always plenty of room on the beach for everyone, so invite a friend or bring your house guests.

How the Full Moon got its name

September: Full Corn Moon
This full moon corresponds with the time of harvesting corn. It is also called the Barley Moon, because it is the time to harvest and thresh the ripened barley. This year, the September Full Moon is also the Harvest Moon. The Harvest Moon is an astronomical name and refers to the full moon that occurs closest to the autumnal equinox. It can occur in either September or October.

It is quite rare for the whole United States to experience a full moon on Friday the 13th, which is superstitiously known as an unlucky day. The last time it happened was on October 13, 2000. And if it you miss this one, you’ll have to wait nearly three decades for it to happen again on August 13, 2049.

The upcoming Harvest Moon has also been referred to as a “micromoon” because it will appear around 14 percent smaller in the sky. This is because the moon is also nearing its apogee — the point in its nearly month-long elliptical orbit at which it is farthest away from Earth.  The moon will be at apogee on Friday, September 13, at 9:32 am EDT. However, it will not appear significantly different in size to our eyes.  The opposite of a “micromoon” is a “supermoon” when the the moon is at the closest point to the Earth in its orbit, called perigee.

I found another web site (http://newsclipper.hubpages.com/hub/The-Moon-Facts-Trivia-and-Folklore.) This site also says the Cherokee Indians called it the Nut Moon and the English Medieval name was Barley Moon.

This entry was posted in Nature. Bookmark the permalink.