Posted on March 21, 2020 by seabrookislandblog 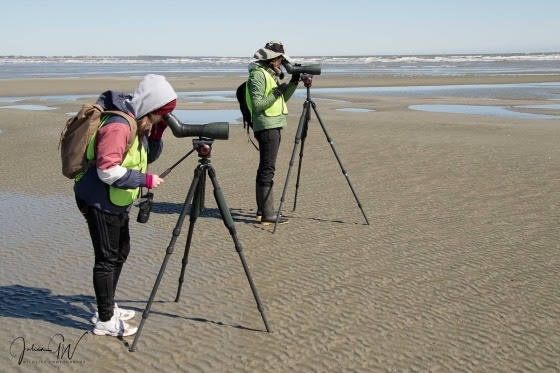 Seabrook and Kiawah Islands will be hosting University of South Carolina (USC) graduate and undergraduate students for the next few months. These students are studying the Red Knots as they use our beaches as a stopover during their long spring migration. The students will be on the beach two days weekly from March through May, mostly likely on Fridays and Saturdays. As students survey the beach, you may recognize them by their bright yellow vests, tripods and scopes. If you find them looking through the scopes, it is important not to approach them or cross through their line of sight as looking for flags requires concentration and patience.

Luckily, the Seabrook Island Birders new Shorebird Steward Program began Friday, March 6. The goal of this new program is to have someone on the beach four hours a day with information, binoculars, and a birding scope for anyone who is interested in observing and learning more about our shorebirds. We will also have a Shorebird Steward accompany the USC student(s) as an intermediary in the event visiting beach goers are curious about their research project.

During their annual migrations, rufa Red Knots depend on stopover sites along the Atlantic coast of the U.S to rest and refuel. In the past, most research concerning Red Knots has concentrated on Delaware Bay, which may host 50-80% of the Red Knot population. However, observations and counts by SCDNR and other colleagues in the region suggest that the coast of South Carolina, specifically Seabrook and Kiawah Islands, are of great importance for knots. The research will quantify the knots use of the area during spring migration.

The objectives of the study are:

To allow the students to spend more of their limited time closer to the beach, the program would like to find lodging on Friday nights for the students. If anyone on Seabrook Island would be interested in providing a room for a student one weekend during the next few months it would be a tremendous help to them. If interested please fill out this form and someone will contact you within a few days.

If you want to learn more about the students and their research please visit their university’s website: http://www.sennerlab.com/people.html

Thank you to everyone for your support of this important study.

Sara Padula and Cameron Wise. Undergraduate students from the University of South Carolina.