Posted on April 29, 2020 by seabrookislandblog

According to the US Fish and Wildlife Service, the population of Red Knots that visit the eastern United States, the subspecies Rufa, declined by 75% between 1980 and 2000. It is estimated that only 45,000 of these birds are alive. A recent study by volunteers from the Seabrook Island Birders in coordination with Aaron Given, Kiawah Island’s Assistant Wildlife Biologist, on March 26, 2020, discovered that the birds on the two islands could represent 10% off all living Red Knot within the subspecies Rufa. 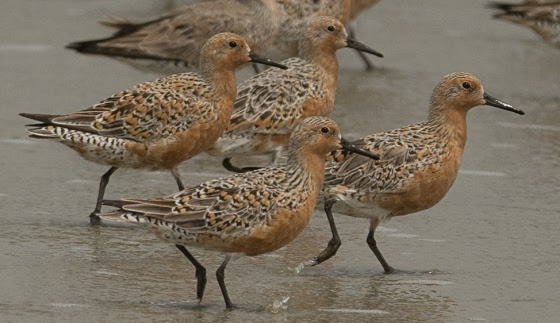 Since the Red Knots can be found all along the Kiawah Island and Seabrook Island beaches, those studying these birds wonder how many birds can be found at one time. Estimates averaged about 2,000 Red Knots in late March. There was ample concern that the numbers were not accurate due to double counting birds that moved from location to location.

With low tide at 4:16 pm, a survey time of 1:30 pm to 2:30 pm was chosen. At that time, six Seabrook Island Birders stood at strategic locations along Seabrook Island beaches with Aaron Given covering Kiawah Island with a truck, could census the entirety of Kiawah Island within an hour’s window. The team members stationed from north to south, the Seabrook Island Birders Team include: Bob Mercer, Mark Andrews, George Haskings, Nini Wolitarsky, Joleen Ardaiolo, and Judy Morr. They each counted the number of birds seen between 1:30 pm and 2:30 pm.

At the designated time, the conditions for observation proved excellent—winds 15 MPH from the east and a clear sky with the sun at the observers backs. Without a doubt, luck prevailed! At the start time of the study, a huge flock of birds fed on the south point of Beachcombers Park. Aaron counted 3,200 birds. At the exact same time, a flock of 950 birds fed on the mud flat half way between Beach Access #1 and the tip of North Beach. Another smaller flock of 250 birds strolled along the beach near Access Point #3. About 15 minutes after he left to check the rest of Kiawah Island, a couple of people on bicycles deliberately drove right into the flock on Kiawah Island, scattering the birds. 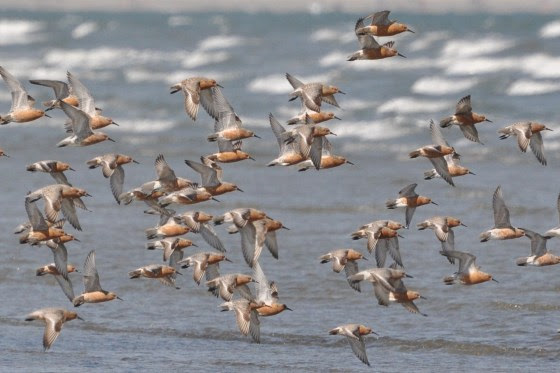 The study conducted created a snapshot of the number of Red Knot within the two communities between 1:30 pm and 2:00 pm when the birds were frightened away. The study documents 4,400 Red Knots feeding on our beaches.

If these birds are to survive into the future, they need protected areas stretching from their southernmost wintering grounds in Tierra del Fuego on the Southern tip of South America up to the islands between Greenland, the North Pole and the northern reaches of the Hudson Bay.

This study underscores the importance of these two islands in South Carolina for Red Knots. An effort will be made to conduct similar studies throughout the Red Knot migration period which ends by late-May, when the Red Knots have all left for the breeding grounds in the frigid north.

Remember … Give them space! Let them Rest!