Posted on June 20, 2020 by seabrookislandblog

In 2015, a major effort proceeded where the Cap’n Sams Creek and Kiawah River outflow was redirected creating the much larger North Beach. The necessary permits were provided by US Fish and Wildlife Services and the SC Department of Natural Resources because this wide expanse of beach would provide excellent nesting habitat for a number of rare and endangered species of birds: in particular the Least Tern and Wilson’s Plover. It has been successful. Both species nest on Seabrook Island now! 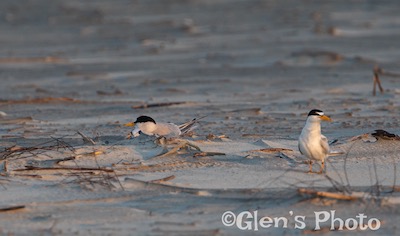 Each year as part of the effort to provide a safe zone, the SCDNR designates a nesting area with yellow signs on North Beach between the lagoon and the dike close to Cap’n Sams Inlet, where the birds most likely will nest. These signs direct beachgoers to avoid the sensitive area so the birds can raise their young. If a nesting bird leaves its nest because of disturbance, the heat of the sun can boil the eggs or fry the young. The attached photos show how minimalist the nests are. In fact, they are really just scrapes in the sand. 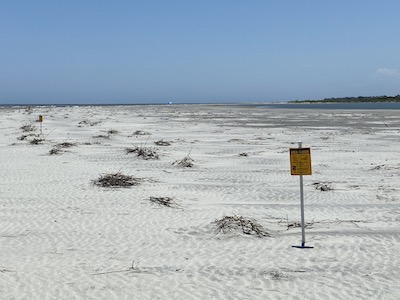 Friday, at sunrise, Seabrook Island’s resident photographer, Glen Cox, discovered a nest of the Least Tern outside of the designated nesting area. It is obvious the bird cannot read and felt that the area between the ocean and the lagoon would provide a better location. Unfortunately, the bird does not understand humans and their desire to walk the beach. In an effort to protect this bird’s nest, a new area has been cordoned with signs. 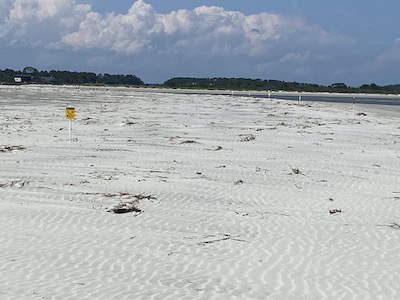 Mark Andrews, a Seabrook Island birder, who volunteers with SCDNR, coordinated with SCDNR to create the new nesting area. SCDNR told him that it has been a bad year for Least Tern nests, so this is likely these bird’s second or third attempt to produce young this year. While Mark was out on the beach, he saw many Least Tern pairs courting so hopefully more nests will be laid and successfully fledge chicks. These little birds are very territorial so if you are walking North Beach and a small tern “dive bombs” you, you have probably inadvertently gotten too close to a nest.

While people are out enjoying Seabrook Island’s North Beach they are asked to respect the boundary established to protect this Least Tern pair’s nest. 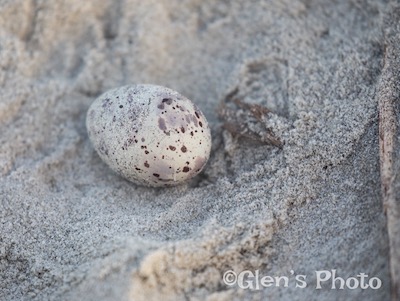