Posted on November 1, 2018 by seabrookislandblog

Hello Seabrookers! Today I want to spend some time on a topic that, really, I could do each year around this time. Each fall Apple captures the attention of the tech world as they introduce their newest lineup of gadgets. They do it in a way that only Apple can do it. These events, dubbed Apple Keynote Events, are attended by all races, ages, and ethnic backgrounds of people just chomping at the bit to see what Apple will introduce to the world. These things are truly a lesson in how a billion-dollar corporation markets themselves. First off, just read about the amazing Steve Jobs Theater in Cupertino, California, where Apple CEO Tim Cook holds these conferences. This is truly a technological, state-of-the-art building that honors Apple’s co-founder Steve Jobs while giving people a futuristic sense of architecture and technology. 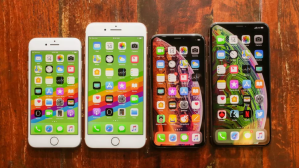 Then CEO Tim Cook comes out, not dressed in a suit and tie, but rather an untucked oxford shirt, designer blue jeans, and casual tennis shoes. This is no accident. This is the type of feeling Apple wants to give its customers. Apple is casual, Apple is cool. Apple is trendy. Apple is “a break from the norm.” And this is the attitude Apple wants to give off when using their products. These events remind me of a presidential “State of the Union” address. There’s about 10-20 seconds in between each round of applause as new, improved products are introduced and new software features are announced.

At last month’s keynote event (watch here), Apple announced several new products, mainly focusing around a new and improved Apple Watch, a new Mac Operating System (Mojave 10.14) and a new lineup of iPhones. This year’s lineup might sound more like an eye chart than a smartphone. I figured I would try to help you sort out what all these letters mean, especially if you plan on upgrading your current phone soon.

First off, the letter X – Apple introduced the X (10th-anniversary edition) phone last year. The big thing about the X is the elimination of the “Home” button. I told you in a column earlier this year that the newest trend in hardware is to have little to no actual “pressable” buttons. The elimination of the button allows for the display to truly stretch from edge to edge and gives the phone a larger viewable display without increasing the size of the actual phone. Another feature of the X models is the new facial recognition feature that allows you to unlock your device by simply looking at it.  For you folks that hate using that pin code, this is your ticket. Although, if you have an evil twin, will they be able to unlock your phone??? Facial recognition is in its early stages so there will be room for improvement on this feature.

In 2018, we now have the XS – You might also think of this as the iPhone 11 (but wait, we skipped 9!!!). It’s basically an improved version of last year’s iPhone X, but with a bit faster processor, and a faster connection method. (Supports Gigabit LTE, which isn’t available yet in Seabrook, but Apple knows what’s coming down the pipeline.) And heck, maybe the camera is a tad bit better.

And the XS Max – The same as the XS, except with a larger screen. For you screen buffs who like the largest screen possible, this one’s for you. (If you’ve got about $1100 to shell out!)

Don’t forget about the iPhone XR – yes, Apple has thrown the letter R into the lexicon. This phone is for those who want to save a bit of money. This model is a few hundred dollars less than the XS and XS Max. Lower performance than the iPhone XS and XS Max, but Apple makes up for it by offering it in a variety of colors. (Yes, Apple knows that many folks will look at color options before performance and storage. How else will you be able to have a smartphone that comes in “Coral”!!!!)

But wait, there’s still the iPhone 8 – Don’t count the numbered iPhones out just yet. The iPhone 8, 7, 6, etc., are going to be the models that include the familiar home button. Many folks who aren’t interested in re-learning how to operate their phone will opt for this model. These models will be a bit cheaper now, but realize that sooner or later, the home button will be a thing of the past (just like they did with the headphone jack), and you won’t be able to find an Apple phone that includes one. So, why not take the leap now? I can almost hear the audible groaning now!

And finally, the Plus – This has been around for the last 5 years or so. The word Plus in the name simply refers to the screen size. For those of you whose eyes may not be so good nowadays may like the larger display of the Plus. It seems, though, that Apple may now use the word Max instead of Plus going forward.

So, let’s review the current batch of modern phones. If your phone doesn’t show up on this list, then yes, I’m saying it’s old! However, I’m not opposed to old phones. Heck, I still have a 6s!  Aside from my battery life, I’m pretty happy with it- although I am planning on an upgrade within the next 6 months. The question to ask yourself is, “Does my phone do everything I need it to do?” Most of you will probably answer “Yes.”

Don’t worry, it’s hard for me to keep up with, too!

This entry was posted in Guest Column, Tech. Bookmark the permalink.
Loading Comments...