Posted on November 12, 2019 by seabrookislandblog 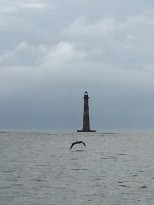 Late autumn SINHG Trips touched on nature, history and the natural sciences in three trips earlier this month, starting with a visit to the historic Morris Island Lighthouse and the surrounding marshes with Dr. Stephen Wise, who vividly narrated the 1863 battle between Confederate forces and Union troops attempting to seize control of Charleston harbor. 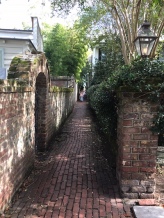 A few days later saw SINHG’ers traveling downtown for a new and fascinating tour of the alleys and hidden passageways around the Old Exchange Building, where our guides brought to life the history of this oldest part of the city, with stories dating back to the late seventeenth century.

A third SINHG Trip was closer to home, at the Oyster Catcher Community Center, where Professor Ashley Pagnotta of the College of Charleston’s Astronomy Department presented a detailed look at our local night skies. Even though cloudy skies precluded direct observations, Professor Pagnotta’s illustrated lecture gave us plenty to look out for when the skies are clear.

This entry was posted in SINHG. Bookmark the permalink.