What Bird Makes this Sound?

Posted on April 30, 2020 by seabrookislandblog

Each spring, Seabrook Island Birders receive many requests for us to identify the bird that makes this sound. Even if you have never seen this bird, chances are if you live or spend time in the spring on Seabrook Island, you have heard him after dusk and before sunrise! The bird we are hearing is the Chuck-will’s-widow, a “cousin” to another in the Nightjar family, the Eastern Whip-poor-will who makes this sound.

Below is a blog we have “recycled” from April 2, 2017, so you can learn more about the Chuck-will’s widow and the migration of these fascinating birds.

And remember, just email us or “Ask SIB” if you have questions about birds you are hearing or seeing!

On Friday, we asked if you could identify a bird by its song.  It was first reported on Seabrook Island early last Thursday morning by George Haskins. The answer: the Chuck-will’s-widow. This bird winters as far south as Colombia, Venezuela and the Caribbean and breeds in pine, oak-hickory, and other forests of the Southeast and Mid-Atlantic states. They tend to live in more open areas than the similar Whip-poor-will, which are not common here on Seabrook Island. 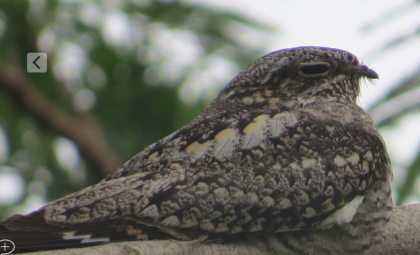 Scientist continue to learn much about the migration of birds, especially with the advancement of technology such as using radar, acoustic, electronic and optical technologies. Spring migration starts as early as January and continues into June. Birds generally take off shortly after sunset, some flying all night and landing just before dawn the next morning. Others will fly nonstop for 60-100 hours as they flyover oceans and continents. Some nights there could be hundreds of millions of birds flying over North America.

Citizen Scientists like all of us are a great resource for migration information as we document bird sightings using the Audubon/Cornell Lab of Ornithology website: eBird.org.  This data is also available for anyone to view. This link will open the eBird page to view the historical bird observations for all species by month for Charleston county. For example, the Chuck-will’s-widow is shown below to arrive in April and is gone by the end of September. 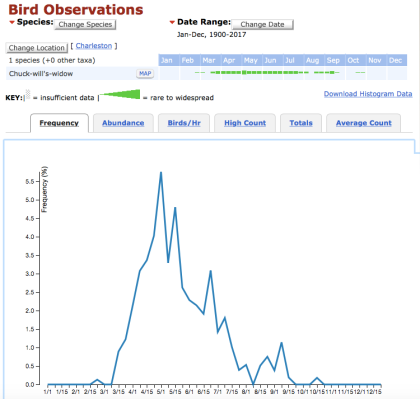 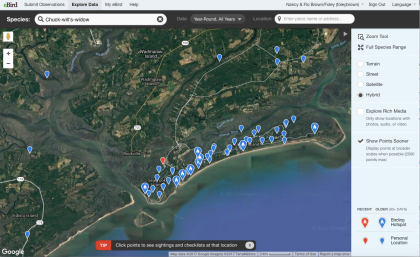 Another great website to learn more about bird migration, including a forecast each week for four geographic regions in the country, is Birdcast.info, a site created by Cornell.  Below is their forecast for the Chuck-will’s-widow for the Gulf Coast and Southeast and it looks like they are right on time!

Throughout April we will continue to share information related to bird migration including which birds are packing their bags to head north, which birds are arriving to breed and those who are just passing through and utilizing our island for rest and refueling.

In the meantime, check out this great article, Birdist Rule #70: Get Prepared for Spring Migration, by Nicholas Lund on the Audubon website.