Red Knots and You!

Posted on April 21, 2020 by seabrookislandblog

Red Knots arrived early this year and the numbers keep rising. Beginning in February with a few hundred birds to the end of March with several thousand birds, these birds need the safety of Seabrook Island and Kiawah Island beaches to power up for their long, non-stop journey toward their breeding grounds in the High Arctic. In order to help the birds, the Seabrook Island Birders (SIB), working closely with Audubon, SCDNR, SIPOA and the Town of Seabrook, implemented a short-lived steward program modeled after the Turtle Patrol and Dolphin Watch. Volunteers would be stationed on the beach with spotting scopes and binoculars to help beachgoers see the unique species of birds visiting our Seabrook Island beaches. 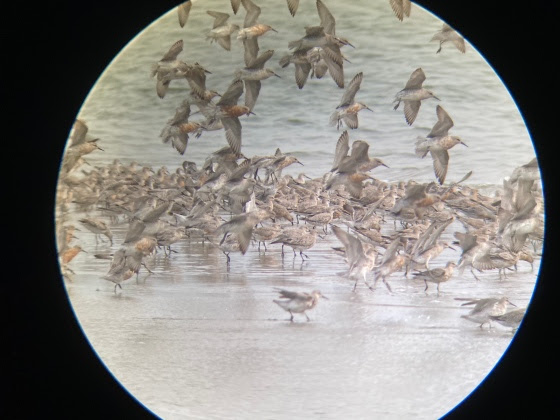 The Seabrook Island Birders (SIB) Shorebird Steward Program hoped to educate residents and visitors about how these small creatures need to fly huge distances. The birds succeed only if they can pack on enough fat (adding up to 40% of their body weight) eating the tiny clams found in the surf. With better beachgoer understanding, the Stewards anticipated people would be willing to share the beach by leaving the birds alone as they fed or rested. Without a doubt, watching a huge flock of birds lift off and swirl around the sky in what appears to be a choreographed dance is breathtaking. From the bird’s perspective, time flying and avoiding people requires the burning of precious calories and may be the difference between life and death.

The anticipated spread of COVID-19 resulted in the SIB Shorebird Steward Program being cancelled for this year. The real fear of virus spread requires a safe social distance of six feet. The planning committee decided a volunteer could not share a view from a spotting scope without people getting close and touching the equipment placing the volunteer and the visitors in jeopardy. The decision was made not to conduct the Shorebird Steward Program in 2020. Despite not having a formal program of volunteers, beachgoers can and are encouraged to still be engaged and helpful. Click on the image below to view a video. 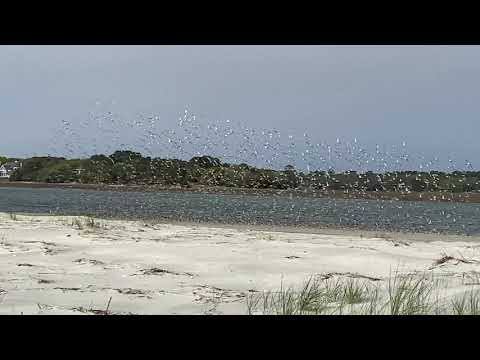 Red Knots have several relatively predictable behavioral patterns. Beach visitors who understand these behaviors derive more enjoyment from their time on the beach, but they also can use this knowledge to protect the birds.

Red Knots in South Carolina eat predominantly Donax (Coquina) clams. As one walks on the beach, these are the small white clam shells that crunch under one’s feet. At high tide, the water floods the beaches and the source of Red Knot food. The Red Knots settle down in flocks of hundreds to thousands preferring the tip of Seabrook Island’s North Beach and the southern tip of Beachwalker County Park on Kiawah Island to rest and await the receding tide. If people can stop about 100 yards back from the tip of North Beach, the birds can rest for as long as they want. A bird resting spends the time converting food into fat. A bird flushed burns up that food to fly to safety. Click on the image below to view a video. 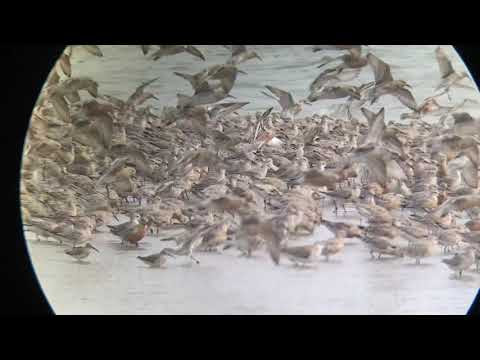 As the tide recedes, the birds leave their resting place and look for the flat, dark brown, ripply mud right along the edge of the water where the clams live. As the tide recedes farther, the clams bury themselves deeper into the wet mud down below the bill length of the Red Knot and the Red Knots spread out along the beach looking for better foraging ground. As the tide returns, the reverse is true. The clams rise up and the Red Knots feed some more. Visitors can help the Red Knots by detouring around the birds. During this time, from falling tide through the mid-rising tide, ample areas of exposed beach should be available for both the birds and us human visitors. Give them space! Click on the image below to view a video. 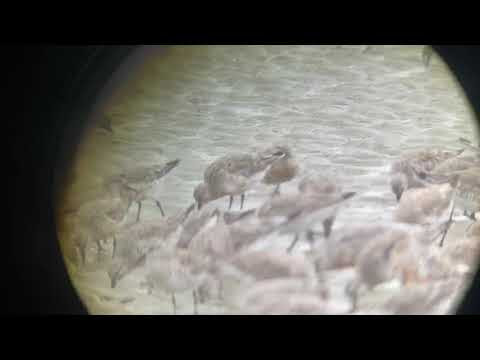 When the high tide covers the beach, the Red Knots need a secure location to rest and bath. Let them rest! 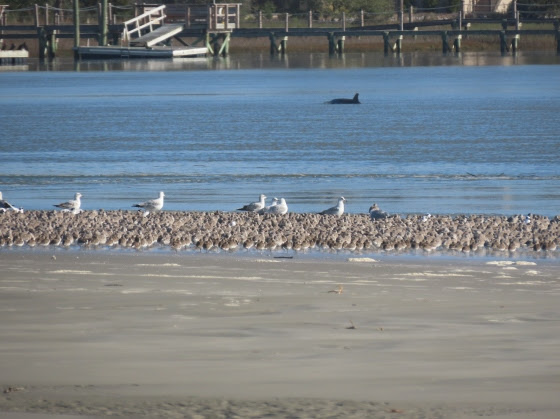 Photos of Red Knots resting at the point of North Beach – Give them space! Let them Rest!